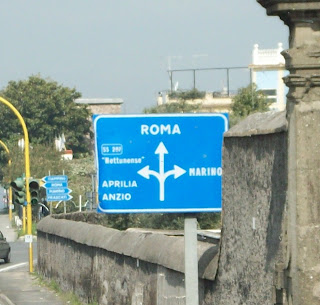 Rome. All roads lead there. My owner's life long dream was realized and I've already covered some of the giddiness involved in
She Came Down to My Level.  The next day there was a tour of the Vatican, The Coliseum, Trevi Fountain. Rome was a dream come to life for MO. Every moment thrilling, none more so than learning to cross a street in the Eternal City. You do it at a crosswalk ONLY. No light is going to change. You step out. In front of speeding cars, which amazingly stop on a dime to let you pass. It is frightening the first couple of times but eventually you get used to it. For Italian drivers hitting someone in the crosswalk is EXPENSIVE.

At dinner after the first full day in Rome physically exhausted, sleep deprived and having had it with red wine, MO wanted a real drink. To MO this means something STRONG. So she took a chance and ordered a "Jack and Coke." The waiter told her in broken English that they didn't have Jack Daniels, but that he could supply her with whiskey. When he returned he had a can of coke and a glass (and not a shot glass) full of whiskey. You must love the Italians.

There was live music during dinner which, oddly enough, MO can't recall, but she vaguely remembers practically breaking into a little cha cha right at the table to Quando, Quando, Quando. After dinner, the bus ride back to the hotel was amazing, Rome at night. Breathtaking.
Posted by Michelle @Pen and Hive at 3:37 AM