From Assisi to Rome 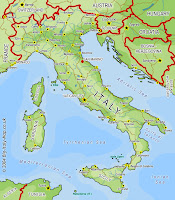 You never know what will happen when you are traveling, who you'll meet, what you'll see, what you'll learn.
There was a rather lengthy bus ride between Assisi and Rome made even longer by a massive traffic jam as they neared The Eternal City. Assisi had been lovely and My Owner and her friends had done some shopping. Unwrapping purchases and looking at them and discussing them filled some of the time during the bus trip. MO and her friend are notorious for hunting down the gift shop wherever they are (I'll tell you a funny story about that when I recount their trip to New York, Philadelphia & D.C.).

Chatting with other travelers was another way to pass the time and MO happened to strike up a conversation with the man seated behind her, based on whether or not Katy Holmes needed several magazine covers in the same magazine. After that I don't know what happened except that the discussion moved on to stimulus packages, worldwide economic collapse, religion, and a host of other subjects that they found endlessly interesting and put everyone within the sound of their voices to sleep.

I can assure you I was NOT in the cargo hold of the bus discussing these issues with Professor J's bag. I was busy catching up with my friend, Mr. Polka Dots (he is very fashion forward) who I had not seen since we left home as he had been lost in Paris and was telling of his harrowing adventure!

But THOSE two...Mr. Smarty Pants and Worst Case Scenario Girl, they didn't run out of anything to say. As a matter of fact they are still at it! They have a blog together and have been having an ongoing discussion for over a year and a half.

I just wish they would get around to tackling something relevant like the dreadful conditions under airplane seats and the rough treatment of checked luggage by those hateful baggage handlers.